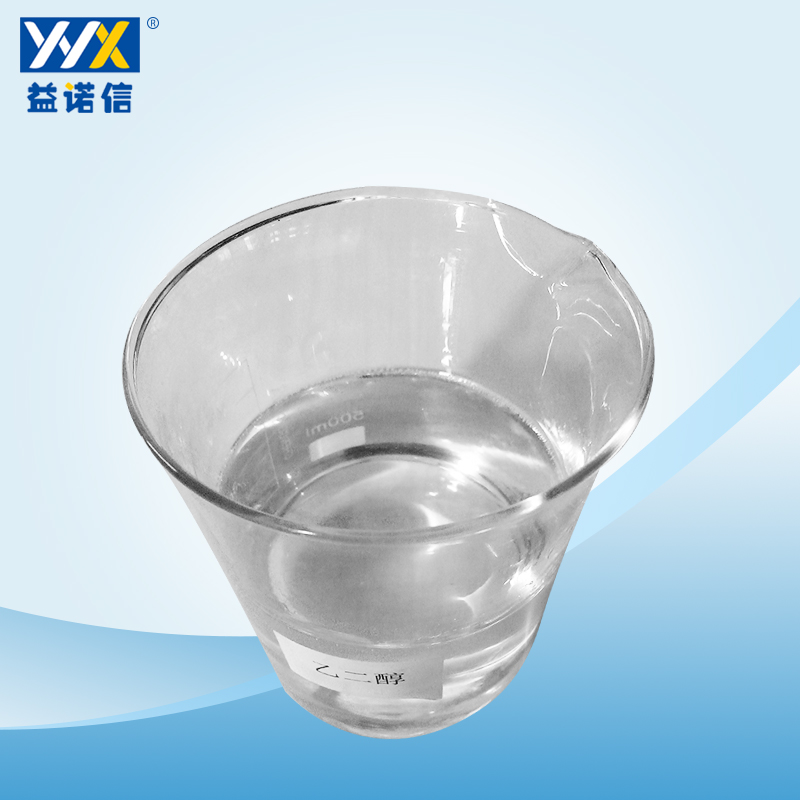 ethylene glycol (ethylene glycol) is also called “glycol”, “1,2-ethylene glycol”, abbreviated as EG. The chemical formula (CH2OH)2 is the simplest diol. Ethylene glycol is colorless, odorless and sweet liquid, toxic to animals, and the lethal dose of human is about 1.6 g/kg. Ethylene glycol can dissolve with water and acetone, but its solubility in ethers is relatively small. Used as solvent, antifreeze agent and raw material for synthetic polyester.

Combustion heat: 1180.26KJ/mol
At 25 degrees Celsius, the dielectric constant is 37
Moisture absorption is easy when the concentration is high

It is mainly used for making polyester, polyester resin, hygroscopic agent, plasticizer, surfactant, synthetic fiber, cosmetics and explosives, and used as solvent of dye, ink and so on, antifreeze agent for preparing engine, gas dehydrating agent, making resin, also can be used for Cellophane, fiber, leather, adhesive wetting agent. It can produce synthetic resin PET, fiber grade PET is polyester fiber, Bottle grade PET is used to make mineral water bottle, etc. It can also produce alkyd resin, glyoxal and so on, and can also be used as antifreeze agent. In addition to being used as antifreeze agent for automobiles, it is also used for the transportation of industrial cooling capacity, which is generally called as cold carrier. At the same time, it can also be used as condensate like water.
Ethylene glycol methyl ether series products are high-grade organic solvents with excellent performance, which are used as solvents and diluents for printing ink, industrial cleaning agents, coatings (Nitro fiber paint, varnish, porcelain paint), copper clad plates, printing and dyeing, etc; it can be used as raw materials for producing chemical products such as pesticide intermediates, pharmaceutical intermediates and synthetic brake fluids; It can be used as electrolyte of electrolytic capacitors, leather-making chemical fiber dyes, etc. Used as textile auxiliaries, synthetic liquid dyes, as well as raw materials for chemical fertilizers and desulfurizers in oil refining production, etc.
When ethylene glycol is used as cooling agent, attention should be paid:
1. Its freezing point changes with the concentration change of ethylene glycol in aqueous solution. When the concentration is below 60%, the concentration of ethylene glycol in aqueous solution increases and the freezing point decreases. However, after the concentration exceeds 60%, with the concentration increase of ethylene glycol, its freezing point shows an upward trend, and its viscosity will also increase with the increase of concentration. When the concentration reaches 99.9%, its freezing point rises to -13.2 ℃, which is an important reason why concentrated antifreeze fluid (mother liquor of antifreeze fluid) cannot be used directly, and it must attract users’ attention.
2. Ethylene glycol contains hydroxyl groups. If it works at 80-90 degrees Celsius for a long time, ethylene glycol will be oxidized to ethanolic acid first, and then to oxalic acid, that is, ethanolic acid (oxalic acid), containing 2 carboxyl groups. Oxalic acid and its byproducts will affect the central nervous system first, then the heart, and then the kidney. If there is no proper treatment, excessive intake of ethylene glycol will lead to death. Ethylene glycol succinic acid causes corrosion to the equipment and makes it leak. Therefore, in the prepared antifreeze solution, there must also be preservatives to prevent corrosion to steel and aluminum and the generation of scale.
Packaging, Storage and Transportation
Packed in GI iron barrel, 200Kg per barrel. During storage, it should be sealed. For long-term storage, it should be sealed with nitrogen, moisture-proof, fire-proof and antifreeze. Storage and Transportation according to general chemical regulations.

Write your message here and send it to us